Malaga, the heart of the Costa del Sol is one of the main areas of tourism in Spain, both at national and international level. Let’s find out how is it Malaga by car, for all of you who decided to rent a car and are wondering about the driving possibilities in our province.

The city is at the foot of Castle Gibralfaro; a lively and very joyful and bustling city with exceptional corners. The capital of the Costa del Sol has an international airport (Malaga airport), as well as a large and important commercial port and a prestigious university.

Malaga is a cosmopolitan town very popular both nationally and internationally. It receives visitors throughout the year and is an excellent destination for Easter, weekends or summer vacation. Its mild climate, its broad white beaches and the excellent golf courses next to the sea are some of the reasons for its popularity; in case you are wondering when to visit Malaga, we wrote another article that covers this.

Attractions to visit in Malaga by car

Regarding history and monuments, you can visit the impressive Gibralfaro Moorish castles. You will feel the real life of the south, culture and heritage as you walk down the bustling streets and enjoy a coffee in one of the many terraces.

At cultural and artistic level Malaga offers many sights and attractions. Here in the city centre you will find the birthplace of Picasso, the Cathedral, the Arab citadel, Roman theater, gardens and parks, Plaza de la Merced, the Picasso Foundation, the Museum of Fine Arts, Mount Gibralfaro…

Join the locals for a stroll in the Alameda Park or the sea promenade at dawn; there are so many places to enjoy.  Come to the south, relax and enjoy!

If you decide to follow our guide and visit the city centre, there are many places where parking the car:

Not far from Malaga we can visit the white villages or the city of Ronda in the mountains with breathtaking views. Nature in the province of Malaga also has much to offer, especially now during the spring months.

Beautiful recommended routes and excursions from Malaga take visitors to the Torcal in Antequera, with fantastic karst formations which are unique in Europe; the green valley of Guadalhorce, the orchard of Malaga, full of lemons and oranges; the Guadalhorce Reservoirs and the impressive gorge of El Chorro; the El Juanar forest in the hills of Marbella; Sierra Bermeja in Estepona with stunning views over the coast, Gibraltar and the African coast. 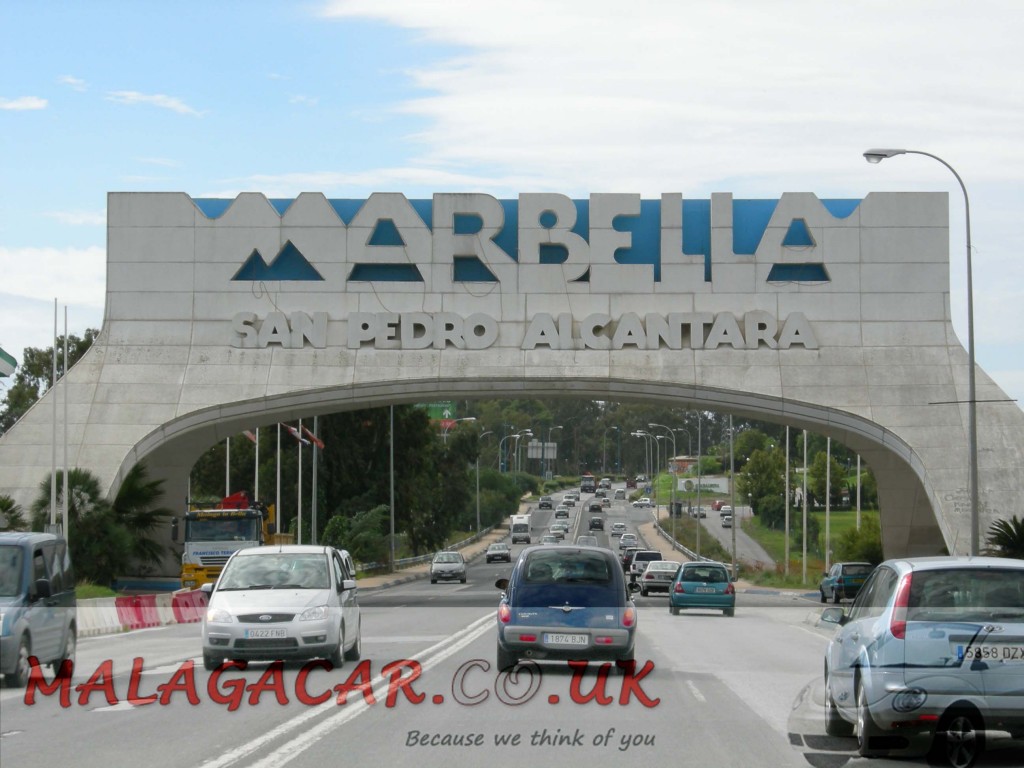 Route of sun and wine

Now we are going to recommend the Route of sun and wine on the eastern Costa del Sol (Axarquia), where the visitor can combine the best of the coast and inland; small coves and farmhouses where Malaga produces the best sweet wines. This road route in Malaga is made up the municipalities of Algarrobo, Sayalonga, Competa, Canillas de Albaida, Torrox, Nerja and Frigiliana.

Accessing from the Mediterranean Highway (A-7) to Algarrobo and up to Competa, along the way we find plenty of the typical farm houses in which the grapes are dried to become the exquisite dessert raisin or for wine production. After drying in the sun, the fruit is pressed and the most wine is stored in French oak barrels are about two years before being sold. The climate and the ability of the people to work grapes make Competa a privileged place for the wine industry.

Canillas de Albaida at the foot of the Tejeda and Almijara mountain range, was a thirteenth century Arab farmstead which was named Albaida (white) for the abundance of white flowers in its surroundings as stated in chronicles. Here we can visit the archaeological remains, the Church of the Incarnation and the hermitages of San Anton and Santa Ana.

In Sayalonga we can visit the alley Alcuza, one of the narrowest streets in the Axarquia, with only 55 centimetres width. It is among one of the many streets that criss-cross the Constitution Square, next to the Tourist Office and the church.

In Frigiliana we can enjoy every step we take through the streets, with their ancient crafts and production of the so-called sugar cane honey or molasses.

Torrox and Algarrobo have interior and coastal stretches of wide beaches prepared and equipped for tourists.

If you like to drive and enjoy the scenery while you do it, you will enjoy visiting the town of Ronda, although there are many other possibilities if you are interested in visiting the white villages of Malaga and discovering its gastronomy.

Ronda is approximately 100 km from Malaga capital city. It sits on a plateau of a large rock outcropping which offers incredible picturesque views from nearly any part of the old town. A charming mountain road with more beautiful views that links Ronda with the Costa del Sol. 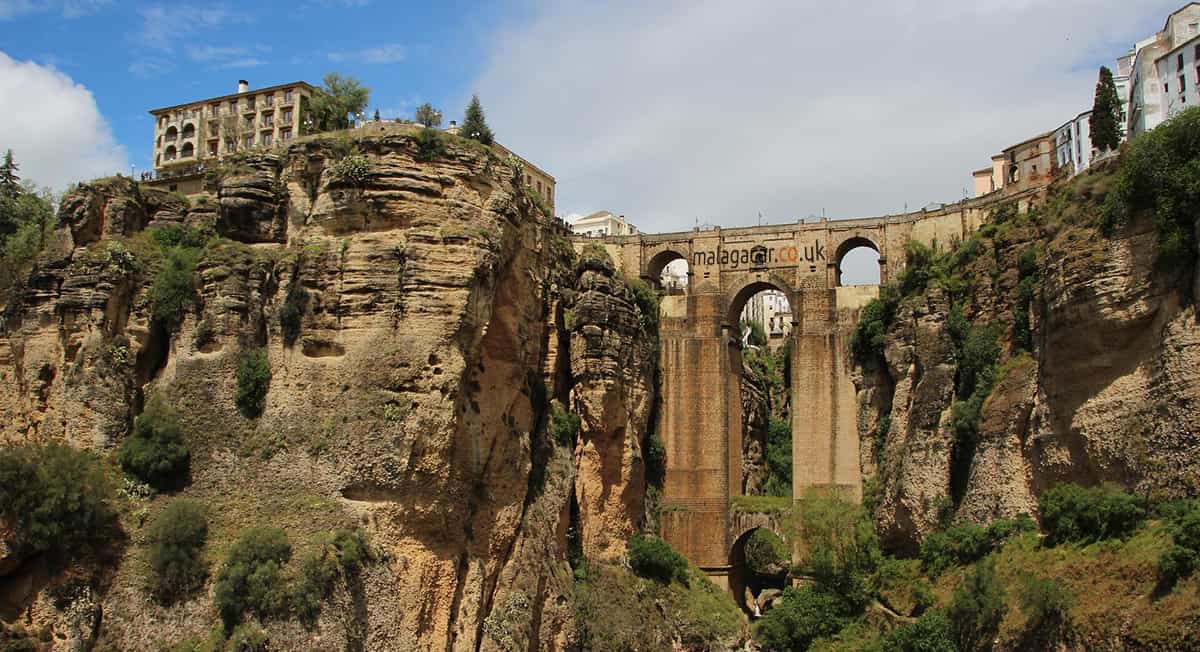 Ronda stands on an altitude of 739m and has a population of around 35,000 inhabitants. The old part of the town retains its Moorish influence with narrow streets and a number of interesting historical places to see. The main place that characterises Ronda, and is well known for, is “El Tajo” (also called The Gorge, 120m deep, which separates the old part of town from the new. Three bridges span The Gorge but the most famous one is “Puente Nuevo” (The New Bridge) which is the main image of Ronda when seen in pictures.

Mijas is approximately 28 km from Malaga Airport, 20 km along the coast towards Cadiz and when you reach a coastal village of Fuengirola, turn off the motorway and head 8 km up towards the mountains. It is famous for it’s “Burro Taxi” (Donkey Taxis) and Horse Carriages; but there are many more things to do in Mijas. With the mountains on one side and the sea on the other, you can enjoy panoramic views of the Costa del Sol almost from any street or square and with good weather and a clear sky you can even see the mountains of Morocco & Gibraltar. 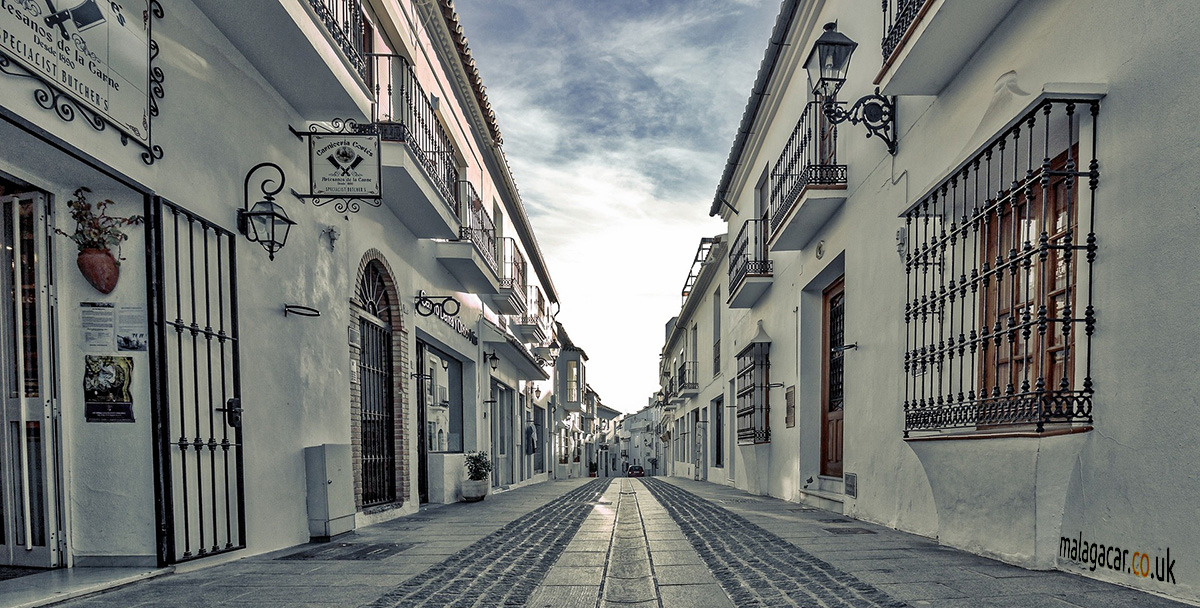 If you want to visit and spend a day, there are numerous restaurants where trying the local gastronomy.

Antequera is very near to some of Spain’s most prominent historical cites; there you will find some of the best sights and experiences Spain has to offer. For example it has many ancient and splendid churches, cathedrals and convents. Along with the Domenes, (or pre-historic caves), ‘El Torcal’ mountains (with astonishing prehistoric rock formations as well as breathtaking views of the Costa Del Sol over 50 km distant), they make the city a must to go and visit. 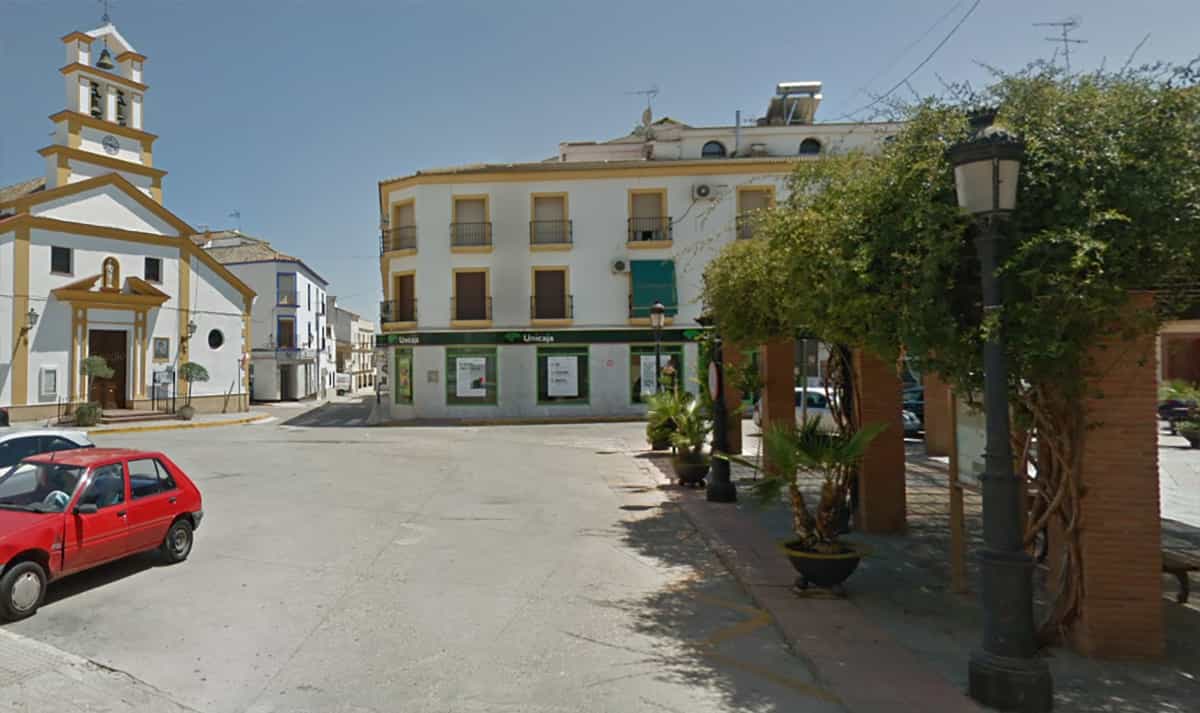 Antequera is one of the best preserved towns in Andalucia, and with many secrets. There you will find prehistoric burial mounds, dolmens, Roman baths, Moorish Fortress, Gothic churches, Renaissance fountains, baroque bell towers and plenty more.

Driving from Malaga airport along the A45 autovia, the first glimpses of Antequera you’ll see will awaken inexplicable feelings. Maybe because Antequera is not just another typical white medieval spanish town so it begins to run through the senses.

Starting from the west of the province we find Estepona, one of the top tourist destinations. Very close, only 34 kilometers to the east is situated Marbella. It is the first and foremost destination in the Costa del Sol where settle colonies of foreign tourists of many countries in Europe, often looking for a home purchase as a second home in a warm area and with unbeatable beaches. 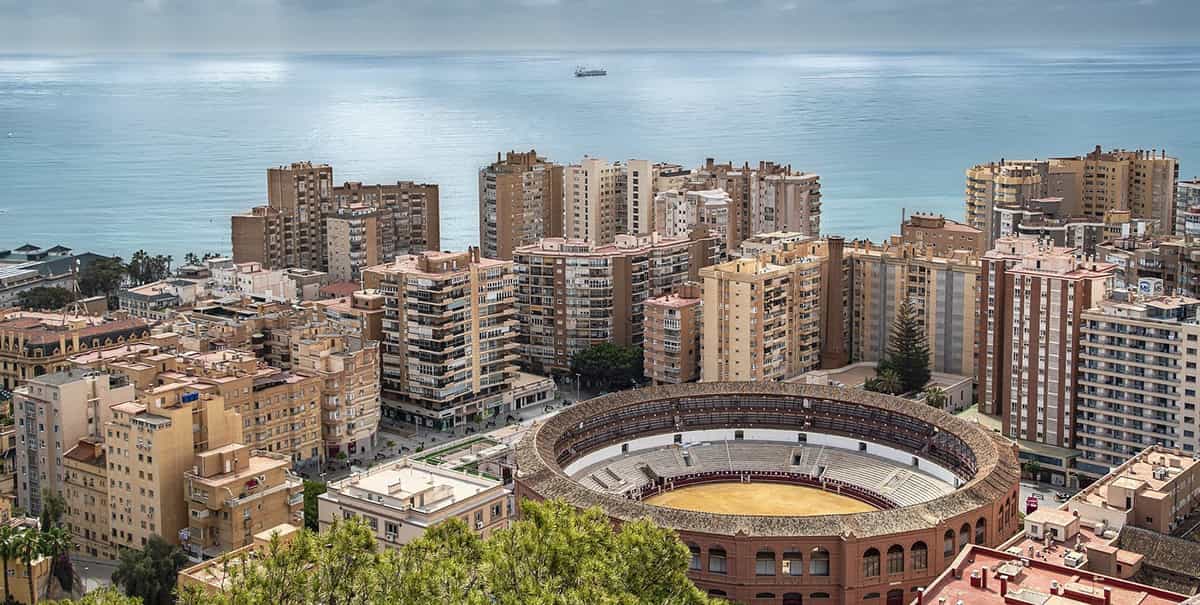 Continuing along the coastline towards the east and in the same distance from Marbella to Estepona, we find Fuengirola; there you will find the most awarded beaches, demonstrating the quality of its coast, making it a perfect place to holiday or live all year round.

Following our trip up the coast of Malaga and just 22 kilometers from the capital, we stop in Benalmadena. This is a perfect town if we are looking for entertainment and many activities, especially during the summer; there you will find amusement parks, aquariums, and a splendid marina.

Just a 5 minutes´ drive away is Torremolinos. This municipality after being originally a small fishing village, became in the 50’s and 60´s destination and place of residence for many foreigners seeking sun and sand.

Continuing east we come to Malaga, the capital of the province and without doubt one of the Spanish cities with more history and tourism; its numerous attractions make it an appealing destination not only to visit but to live there permanently.

We finish our tour visiting is Nerja, almost bordering the province of Granada; this is one of the coastal towns of the province which mostly has retained its true essence, and where the population of British has found the perfect area to buy a second home and spend long periods. Nerja is the complete opposite direction from the airport, about 50 km east of Malaga along the coast.

Nerja is famous for “Las Cuevas de Nerja” (The Nerja Caves, discovered in 1959) with primitive paintings and “El Balcón de Europa” (The Balcony of Europe); which has stunning views overlooking the Mediterranean Sea. Other places of interest whilst visiting Nerja are the Aquaduct (dating from the 19th century), the Baroque Hermitage of Las Angustias (17th century) and the Church of El Salvador.

All these places are easily accessible by car from Málaga in less than an hour. As you can see, there is much to see in the city and surrounding area! Check our prices for car hire Malaga, and start planning your trips by car! 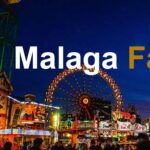 All you need to know about Malaga Fair in August 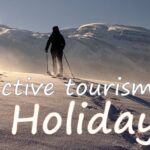 Active Holiday to the Costa del Sol in Malaga with activities 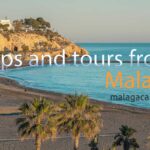 Top tours and trips from Malaga by car all year around