Unless you live in the centre of a town or near a local train station, private transport is essential on the Costa del Sol. Although road communications have improved enormously in recent years, they haven’t kept up with demand. Since the mid-90’s, traffic density has doubled on the coast, yet the AP-7 toll motorway is the only new road in the area and experts now forecast the A-7 will reach saturation point within the next two or three years. 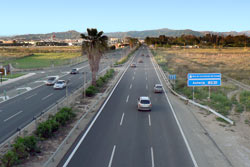 Malaga, in particular, is in desperate need of a second ring road to circumvent busy urban traffic, a project that has been in the government infrastructure pipeline for several years. Construction on this new road has begun, although it is multi-phase and comes at the same time as a number of other major projects underway in Malaga such as a metro and airport expansion.

Traffic bulletins are broadcast on the radio every hour by SER Malaga and Estepona, M-80 Malaga and Onda Cero Malaga and Marbella in Spanish. The national Traffic Department also provides information by phone at 900-123-505. Additionally, there are illuminated information panels located at intervals over the A-7 warning of accident and driving conditions – although the information often isn’t very useful, as you’re already stuck in the traffic jam when you read it.

The A-7 (Old N-340) or Autovia del Mediterraneo is the new name for the N-340, but although the signs on the road have changed, it’s likely to be years before residents stop calling it the N-340. Some stretches of the old N-340 are now officially known as N-340 such as from Fuengirola to Torremolinos via the coast, Marbella to Puerto Banus and Rincon de la Victoria to Nerja (N-340a).

The A-7 runs from Cadiz to Barcelona forming the backbone of road communications along the coast, and in many areas provides the only means of getting from one place to another. The road is mostly dual carriageway. There are numerous service stations along the A-7, some self-service and others, manned. Be aware that not all are open 24 hours but of those that are, you must pay at the cash desk beforehand if you want to fill up after 11pm. To prevent drivers from filling up without paying, some service stations have pumps that require pre-payment regardless of the time of day.

The AP-7 Motorway – known as the Autopista del Mediterraneo and Autopista del Sol along the western side of the Costa del Sol – provides a good alternative to the A-7 if you’re travelling long distances. The motorway has three stretches within the Malaga province:

Driving conditions are excellent and the speed limit is 120 km/h. The tolls are expensive particularly from June to September and during Easter week. Fare estimates can be obtained from autopistadelsol.com.

At several points on the coast the road divides into the AP-7 toll stretches and the A-7 non-toll stretches and it’s easy to find yourself on the wrong one. The AP-7 motorway is signposted and has a red circle under it saying Peaje (toll), and the A-7 is usually signposted as A-7 Costa. Once you’re on a toll stretch you cannot get off until the next exit nor avoid paying the toll fee. Aside from concentrating when approaching the division of the road, an easy rule is to always keep right for the A-7 or always keep left for the AP-7. Beware of drives changing lanes at the last minute on or near the interchanges.

If you’re travelling east-west along the coast you cannot avoid the A-7 or the AP-7 and there are few alternative routes. Sometimes it’s quicker to drive through the towns rather than use the congested bypass, but the chances are that if the bypass is busy, the town will be too. Numerous traffic lights and roundabouts also slow progress down. While planning your trip, it may be helpful to keep these alternate roads in mind in case you find yourself in a lengthy traffic jam.