Average sea temperatures are around 15°C (59°F) from November to June and 20°C (68°F) from July to October, although due to the proximity to Atlantic currents, the water is often cooler. Some people pride themselves on the fact that they bathe daily throughout the year, but most residents don’t go in before May or after September. 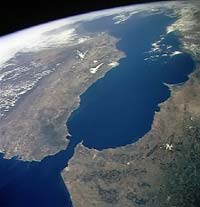 The water is generally clean and in the summer months the water is tested weekly. Only rarely in the last few years has bathing been prohibited for health reasons. Occasionally however, strong currents or storms bring rubbish and seaware to the shore. The Mediterranean is generally a much calmer sea than the Atlantic but you should never underestimate the power of the sea. On windy days waves can be strong with powerful undercurrents. Some beaches slope down very quickly from the shore and you can be out of your depth after just two metres. On beaches with lifeguard services a coloured flag is flown indicating the state of the sea:

Jellyfish are sometimes found near the shore in late summer and autumn and although their sting isn’t fatal, it’s painful. If you’re stung wash the sting with fresh water and apply cream.