Festivals and fairs in Malaga are a essential part of cultural and social life in Spain. Andalucia is world-famous for its particularly colourful and lively celebrations, and the Costa del Sol has its own fair share. Every village and town has its annual feria lasting from one or two days to a whole week. They’re usually held on the local saint’s day when the saint is usually paraded through the streets or a pilgrimage is organised to the local shrine. 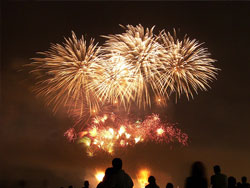 All localities have two local holidays a year as well as national holidays. Festivals are a great occasion for all the family when celebrating goes on for hours and often until the next day. Bullfights, fireworks, concerts, folklore recitals and competitions are all part of most fairs.

During feria week, normal life grinds almost to a halt and many businesses and shops in the featured town close, while some hold only morning or very limited hours.

In large towns the main celebrations last around a week and have several sections. The streets and bars and restaurants in the old quarter are decorated and celebrations take place during the day. At night the fun moves to the fairground where in one section there are specially built casetas where drinking, eating and dancing goes on, and in the other there are typical fairground attractions, mainly for children and young people. Many casetas are privately owned and you need an invitation or representation of another member in order to enter. Some, however, are public and usually run by the local council or local political parties. Council casetas often put on shows or concerts.

It’s common for locals to spend a whole night in a caseta and it’s not unusual to spend more than 100€ on food and drink a night. Fairground attractions are also expensive and each ride costs 3€ or more. Some localities have a special children’s night during the week when rides are cheaper; but that night is also more popular and there is more people looking for a cheaper ride.

The main fairs and festivals on the Costa del Sol are: