Following are some routes between a number of towns in the Malaga province, including alternative routes helpful to circumvent the main highways when they are jammed. For detailed descriptions of scenic driving routes and holiday itineraries, visit the historical routes section of the guide. 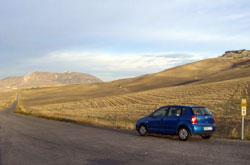 La Cala via Entrerrios to Fuengirola / Coin
Take the road to La Cala Golf and follow to Entrerrios. The road then joins the main Fuengirola-Coin route. Bear in mind that this road into Fuengirola centre is almost always gridlocked.

La Cala via the race course to Fuengirola
Take the signposted road in La Cala to the race course, which then joins the A-7 at the Miramar complex next to the river. This road is a good alternative for those who live in the urbanisations between Fuengirola castle and La Cala.

South-North-Benalmadena to Mijas (MA-408)
A narrow winding mountain road, only recommended for those who live along it.

Fuengirola to Mijas (A-387)
A good road, although it’s steep going up to Mijas and progress can be slow if you get behind a slow vehicle or a bus. The stretch from the motorway to Fuengirola is always busy and often gridlocked near the centre, although the section from the AP-7 motorway to the A-7 overpass will be dual carriageway in the near future.

Fuengirola to Coin (MA-426)
A long and winding road with numerous sharp bends. It is in poor condition in many sections, particularly around Mijas Golf and the Entrerrios intersection. The Fuengirola section is often gridlocked in both directions.

Malaga to Colmenar via the Montes de Malaga (C-345)
This road used to be the main route to Granada (the journey took around four hours). The road is extremely winding and the ascent is steep. The surface in some sections is in poor condition and the first few kilometres out of Malaga are busy during the weekends, as there are many popular restaurants situated here.

Malaga to Ronda via Churriana (A-366)
Dual carriageway for the stretch up to Churriana, and then a good road through Alhaurin El Grande and Alhaurin de la Torre, which has been recently resurfaced and upgraded.

Malaga to Campillos via Cartama (A-357)
Dual carriageway until Cartama and then single-lane to Campillos. The road is in excellent condition and well sign-posted. This road is very busy at peak times.

Malaga to Antequera (A-45)
Apart from the A-7 this is the province’s main road and the gateway to the rest of Andalucia via the A-92 and Madrid via the A-4. The road is dual-carriageway and is in the process of being resurfaced. A toll motorway is planned from Malaga to Antequera as an alternative and is expected to be finished by 2007/2008.This road will run from the west of Malaga via Almogia and Casabermeja to Antequera.

Marbella to Istan
Istan now has its own exit from the Marbella bypass from N-340, which saves considerable time on the journey, but the road is mountainous, narrow and winding. Views of the Embalse de la Concepcion reservoir and the coast, however, are beautiful. The road beyond Istan goes into the Sierra de la Nieves natural park and is only suitable for four-wheel drive vehicles.

Marbella/San Pedro to Ronda (A-376)
A good wide road, although it is mountain driving and some of the bends are very sharp. It takes about 45 minutes to reach Ronda from the coast, although if you get behind a queue of slow traffic progress is much slower. This road is the main route from the western Costa del Sol to Seville.

Marbella to Velez-Malaga via Ojen, Monda and Coin (A-355)
An excellent and recently upgraded road, known as the Arc Road with a passing lane on much of the ascent to Ojen and dual carriageway for part of the way. Journey times from inland to the coast have been greatly reduced with this road.

A-7 to Casares (MA-546)
A reasonable road, although in a poor state of repair in some sections. Some parts have sharp bends.

Velez-Malaga to Axarquia (C-335)
Conditions on this road vary, but most of the driving is along narrow and winding mountain roads.