Drive west along the N-340 beyond Estepona, past Costa Natura and, just after the km 147 mark turn right to Casares. There are no markings on the narrow, 14 km (9 mile) road, but it is in fair condition. As is the case when taking other such minor roads that delve into the interior, you are soon transported into a scene that contrasts markedly with the coast’s concrete ribbon. Eucalyptus trees line both sides of the road before the Sierra Bermeja heights come into view, their rolling hills scattered with cortijos (country estates). 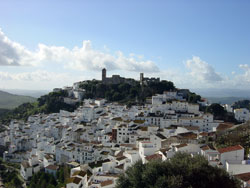 After 8 km (5 mi), the road narrows and rises among cork oaks. On one of the bends is the rustic Venta Victoria. A little further on you’ll enjoy good views across to the coast and, after 3 km (1 ¼ mile) around a bend, you will find the town of Casares, a confection of white cubes on a mountain spur topped by the brow outline of an alcazar. Several roadside restaurant-bars, all with pleasant terraces, which overlook the town.

Further on, turn left and do the locals a big favour by parking at the entrance of their town. Climb the narrow, uphill streets to see what remains of the Moorish castle, or rather, as the ruins don’t really amount to much, to check out an excellent vantage point. This is the site from which hundreds of Moriscos – descendants of the Moors who revolted against their Christian rulers in the early 16th century – were hurled to their deaths.

Back on the road that skirts the town, follow signposts to Manilva and you start to appreciate a different view of Casares. Soon you see the vineyards of Manilva, which is known for both the quality of its grapes and its lively vino de terreno. Near a quarry on the town’s edge, take a track on the left (signposted ‘Baños Romanos’) to reach the Roman Baths. From the outside, the baths don’t look like much, but inside there are Roman arches and the water is invitingly clear. Julius Caesar visited these baths and locals like to believe that its waters’ healing powers were responsible for curing his skin problem.

Nearby, British-run Roman Oasis (952-892-380; June-Sept; evening, and lunch on Sun) is a restaurant attached to a four-room hotel, the Inner Sanctum. Manilva is an unremarkable place, but you may want to visit a back street bodega (wine cellar) to sample a glass of the local wine.

Afterwards, continue to the N-340, turn right and you will reach the turn off for Puerto Duquesa, another of the Costa del Sol’s pueblo ports with the usual boutique-style shops, bars and restaurants, and an array of luxury yachts and cruisers.