Buses are the principal means of public transport and the main routes in the West are run by Portillo (a company which currently holds a monopoly) and by Portillo and Alsa in the East. There are also some other local bus operators. Services range from reasonable to poor depending on the route and few residents speak highly of the service. Things have improved somewhat in recent months, although buses still arrive infrequently and it’s not uncommon to wait 45 minutes for a bus that supposed to come every 20 minutes. 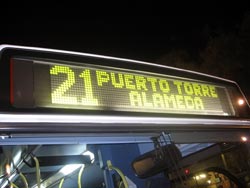 Alhaurin El Grande
Several buses run daily to Coin and Malaga with a reduced service on Sundays and public holidays. There isn’t a bus station, so buses leave from the main plaza. For more information contact (952-490-196).

Estepona
The bus station is situated near the sea shore on Calle San Roque. There are several buses daily to Algeciras, Granada, La Linea and Seville. Buses to Madrid and Barcelona leave once a day. Local services to Fuengirola, Malaga (one hour journey) and Torremolinos leave frequently, and the main local bus route is from Estepona to Marbella via San Pedro. There’s little parking for cars at the bus station. For more information contact 952-800-249.

Malaga
The main centre for buses is in Malaga in a modern bus station situated in Los Tilos near the main train station and several shopping centres. The bus station has several small shops and cafés, a currency exchange counter and internet facilities. There are several services daily to the larger cities in Andalucia and express coaches to Madrid and Barcelona. Coach services for Europe and Morocco are also available. Buses depart from here to the main centres on the coast: Benalmadena, Estepona, Fuengirola, Marbella and Nerja.
For long distance journeys you can book a seat by phone in Portillo and Alsina Graells. For more information call 952-350-061.

Manilva
Three buses a day run from Manilva to Estepona from Mondays to Saturdays. The journey takes around 45 minutes. There’s no service on Sundays.

Marbella
The bus station is on the A-7 to the north of the city on the km 184 exit, and is modern and spacious with good facilities including shops, restaurants and a large waiting room. Parking for private cars is ample. Frequent buses run to Benalmadena Costa, Estepona, Fuengirola, Malaga, Ronda and San Pedro.
There are also several buses daily to the main cities in Andalucia and Madrid. Buses also serve the villages in the vicinity: Coin, Istan, Monda and Ojen. For more information call 952 -764-400.

Mijas
Mijas doesn’t have a bus station and buses leave from the main square opposite the town hall. There are buses every 30 minutes to Fuengirola and several buses daily to Coin.

Nerja
The bus station is on the N-940 at the junction with Calle San Miguel and frequent buses run to Malaga, Granada, Malaga airport and the hospital in Velez-Malaga, as well as local services to Maro, Frigiliana and Torre del Mar. For more information call 952-521-504.

San Pedro
The bus terminal is situated on the N-340 in the centre of town. There are several daily buses to Ronda and San Roque, as well as frequent services to Estepona, Fuengirola, Malaga, Marbella and Torremolinos. Buses for Benahavis run twice a day. For more information call 952-781-396.

Sotogrande
Buses stop at Guadiaro. Bus services run several times a day from Estepona to La Linea, although not all stop at Guadiaro for Sotogrande. The Malaga to Algeciras bus service also has a stop at Sotogrande and buses run more or less hourly from 5am to 7pm (Malaga) and from 8am to 10pm (Algeciras). These bus services get very crowded and it’s best to book in advance. For more information contact Portillo in San Roque 956-172-396.

Torremolinos
The bus station is on Calle Hoyos and there are frequent bus services to Benalmadena, Fuengirola, Malaga and Marbella. There’s no parking for cars at the station. For more information contact 952-382-419.

Velez Malaga
The bus station is on the main road into the town from Torre del Mar on Avenida Vivar Tellez, opposite the main park. Bus services are available to Malaga, Nerja and surrounding villages. For more information call 952-503-162