Turn off the N-340 at km 177, just west of Puente Romano and the Mosque. The 16 km (10 mile) long road (C-427) is narrow and unmarked but should present no problem to cautious drivers. After about 2 km (1 ¼ miles), past the Club Sierra and the last signs of urbanisation, you begin to get the impression that you are in the countryside. Big, established villas are scattered on your left with the Sierra Blanca rising steeply on the right, as the road twists through small folding hills. Avocado and citrus trees make the lush valley below. 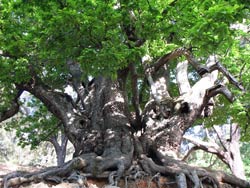 Soon you get to the toll road and a bit further the wall of the Embalse de la Concepcion, the dam that supplies water to the costal communities. Scrubland – some of it terraced – is dotted with juniper gorse and wild herbs, along with pockets of cork-oak olives. Soon you are in the municipal area of Istán. Pine, fig, citrus and carob make an appearance, and in spring, a profusion of wild flowers. The mountain rises on the right, while cortijos (farm estates) dot the view to the left. Just below Istán, you pass the Ermita de San Miguel in the rock face, to which the villagers make a romería (pilgrimage) at the end of September. Don’t be put off by the messy buildings on the approach to the village. You should find parking spaces as you are entering.

There is not much of note to see in Istán (population 1,300) but a stroll along the narrow, crooked streets give the impression that this ancient village has changed little in domestic building style and street layout since the 9th century, when it was founded by the Moors. You can hear the burbling sound of running water everywhere. It’s no wonder that the Moors liked the place so much: the village’s sole monument is the Torre Árabe, whose tower features a Moorish arch. It is being renovated; check at the Town Hall (952-869-603) for visiting times.

Many locals work on the coast. Fewer now till the small plots, tend the valley’s citrus trees or herd the sheep and goats that sustained the village until recently. Some run bars whose weekday regulars are retired men, with day trippers on the weekends. Have a drink and absorb some local life before returning to the Marbella road.

Turn off the N-340 onto the A-355 on the eastern edge of Marbella. It’s 19 km (12 miles) to the Refugio de Juanar. After you’ve negotiated the outskirts of Marbella, the road twists up between fir and eucalyptus trees. Terraces of citrus trees are stepped down to a ravine on the right. After the Venta Barranco there’s a fine view of the village of Ojén. Take the turn-off down to the village, which faces southeast above the green valley of the Río Real where the fertile ground is cultivated to maximum effect.

Park along the main road and walk into the village. Although many of its 2,000 inhabitants now commute to work in Marbella, and much of the village has undergone restoration, in its cobbled streets and plazas there is still the atmosphere of a typical pueblo: widows dressed in black contrast with thick whitewashed walls, weather-beaten men sit in groups on dining chairs outside doorways, striped curtains blowing in the breeze.

After the village the scenery becomes more dramatic as the road twists up to the 580 m (1,900 ft) high Puerto de Ojén pass. Take a turn-off to the left (signposted to Juanar) and the road travels 5.5 km (3 ¼ miles) into the nature reserve’s stark landscape. It eventually reaches an oasis of trees surrounding the Refugio de Juanar (952-881-000) where peacocks often display their feathers as means of welcome. The Refugio was built by the state-run Parador organisation on the foundations of a Larios family hunting lodge. The staff formed a management cooperative and, with the help of the provincial authorities, they have made it a very comfortable and friendly hostelry, with an attractive pool and terraces.

From here, more than 1,000 m (3,281 ft) above sea level, there is a fine view of the valleys and hills to Marbella and, on clear days, you can see across to Africa. If you’re here until dusk, you might catch a glimpse of the wild ibex among the rocky crags that often descend to drink water. Back at the Refugio, if you’re feeling energetic and have good walking shoes, you could follow part of the forested trails into the Sierra Blanca, Istán or Ojén.