At the eastern end of San Pedro de Álcantara, turn off the N-340 onto the A-376 signposted to Ronda. About 8 km (5 miles) from the turn-off, you will see a valley which is now Los Arqueros golf course. Clinging to a hillside, on the right, are the pastel-coloured buildings of La Heredia, a modern pueblo-style residential complex. After that you pass the luxury residential area of El Madroñal and El Coto, a hunting lodge-style restaurant. 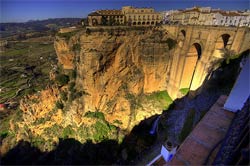 The wide road is in good condition, but its twists and turns reduce the recommended speed to about 50 km/h (30 mph). In early summer, yellow gorse covers the lower slopes. On the left you can see views across the valley of the Río Guadalmina and undulating hills toward the coast, Gibraltar and even as far as Africa. You might even spot eagles and vultures swarming above the region where the mountainside is at its darkest in the Serranía de Ronda, which is part of the 18,592-hectares (46,000-acre) Parque Natural Sierra de las Nieves. After about 35 km (22 miles) you will be on the high plateau of the Serranía, where the road is less twisting. Isolated hamlets lie in the basins of the ríos Genal and Guadiaro, on your left. Shortly you will see Ronda. The town sits on top of a rocky outcrop in a basin surrounded by the mountains of the Serrania de Ronda. It is 740 m (2,428 ft) above sea level, with the highest mountains reaching some 2,000 m (6,562 ft). Ronda’s 477 sq. km (185 sq. miles) municipal territory is one of the largest in Andalucía, yet the town and its 19 rural villages have a total of only 36,000 inhabitants. Livestock and other types of farming have traditionally been the main occupation.

The Serrania’s nooks and crannies used to provide perfect hiding places for outlaws, who would come down from the hills to hold up a stagecoach or kidnap the son of a wealthy landowner. Bandoleros and tobacco smugglers were active in the area right up to the 1950’s, and today this dubious story is told in Ronda’s Museo del Bandolero (Calle Armiñán 65; With Summer opening times: 10am-8pm and in winter from: 10am-6pm; ).

Stop before entering the town to look at the two gateways in the town’s remaining walls. Puerta de Almocavar, on the right, was built in the 13th century and gave access to the Moors’ alcazaba and town; Puerta de Carlos V is a typical Renaissance gateway. The wall’s remnants run round to the right. Drive into the town and through the old part, to which you will return on foot. Cross Puente Nuevo into the newer part of town, El Mercadillo, and try to find parking. The best thing to do is to go through the Plaza de España into Calle Virgen de la Paz and take the first left to a public car park. If it’s full, continue along Calle Virgen de la Paz to find a space in Plaza de la Merced. Walk back to Plaza de España and pop into the tourist office for relevant information.

Ahead is the Puente Nuevo (New Bridge) spanning the Tajo (Gorge) across the Río Guadalevín and overlooked by a parador occupying the site of the old Town Hall. The bridge, built between 1751-93, reaches 98 m (320 ft). The architect of what has become the town’s symbol died because of his hat. As he was being lowered in a basket to inspect his creation, the wind caught his hat. He reached out for it and fell into the gorge. The Tajo is an impressive sight that seems to hold a compelling fascination for people intent on suicide. Picadors’ horses that were gored and killed by bulls used to be pushed into the gorge here.

Across the bridge, you are again in the old part of town. Turn left onto Calle Santo Domingo. On the left, La Casa del Rey Moro was not the house of a Moorish king – as the name suggests – but was built in the 18th century as the town house of a wealthy family. It is now being converted into an exclusive hotel, but its attractive gardens are open to the public (daily, summer: 10 am-8 pm; winter: 10 am-7pm; admission charge). A secret tunnel with a long, winding stairway, the Mina de Ronda, leads down to the bottom of the gorge. If under siege, the Moors used Christian slaves to carry buckets of water up the stairs. Also noteworthy are the elaborate facade, sculptured balcony and wrought-ironwork of the privately owned Palacio del Marqués de Salvatierra, which dates from the 18th century. The wrought iron here is typical of the work of Ronda’s renowned forges: you will see much more of it around town in rejas (window grills) in doorways and on balconies.

As you turn right into Calle Armiñán, the main street, you will see on the left the 14th-century Minarete de San Sebastián, which shares the Nazarene architectural style of the magnificent Alhambra palace. Next along, off to the left on José María Holdago, is the Casa del Gigante (Giant’s house), a Moorish palace of the same period but much changed over the centuries. Turn left here to head down the alleys to the 13th-century St. María la Mayor Mosque. A stone’s throw southwest is the Palacio de Mondragón (Mon-Fri 10am-6pm, Sat, Sun 10am-3pm), built in 1314 by the Muslim king of Ronda. Little remains of the original apart from the underground passage which connect with the alcazar ruins.

Wander back across Puente Nuevo towards the Plaza de Toros (daily 10am-7pm). This bullring, dating from 1785, is one of Spain’s oldest. Some 200 years ago, Pedro Romero killed 6,000 bulls here. Below part of the covered terraces is a bullfighting museum. Ernest Hemingway and Orson Welles, both friends of the Ronda matador Antonio Ordoñez, were ringside regulars. For more bullfighting memorabilia – including the edible kind, in the form of rabo de toro (ox tail) – go to the restaurant Pedro Romero (952-871-110) opposite the Plaza de Toros.