You can drive from Marbella to Malaga in less than an hour if you take the A-7 motorway. 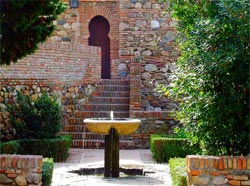 Approaching the outskirts along the N-340, follow signs to Malaga-Centro Ciudad, which will lead you to Avenida Andalucía. When you see a line of modern commercial buildings, look for the large grey called ‘El Corte Ingles’ ahead on the left. Bear right around the traffic island to pass in front of the building and take the first right to its underground car park.

Walk back to Avenida Andalucia and turn left along it to cross the bridge over the Rio Guadalmedina to Alameda principal. If you are interested in modern Spanish art you may like to go to the Centro de Arte Contemporaneo (Tues-Sun, 10am-2pm and 5:30-9:30pm, closed Mon, free admission), which is reached by turning right along Calle Comandante on the far side of the bridge Calle Alemania, where the museum is located just off Comandante. The museum’s late opening hours mean you could pay a visit at the end of your day.

Back on Alameda Principal, keep left and then turn left onto Calle Torregorda. Ahead you will see the Puerta de Atarazanas, an 11th-century Moorish entrance to what is now Malaga’s food market. Walk through to the other end and go straight ahead until you reach the river. On your right, in Paseo de Santa Isabel is the Mueso de Artes y Tradiciones Populares (Winter: Mon-free 10am-1:30pm, 4-7pm; Sat 10am-1:30pm; Summer: Mon-Fri 10am-1:30,5-8pm,Sat 10am-1:30pm).

The buildings, built in 1632, used to be an inn run by Franciscans, and currently form a museum of arts and popular traditions. Established in 1975, it occupies 3 floors around a central patio. Turn right when leaving, take the first right into Calle Cisneros and continue into Plaza de la Constitución, site of a stamp and coin market on Sundays. Notable on the Northern side is the Casa de Consulada. To the left the Iglesia del Santo Cristo de la Salud, inaugurated in 1630, features typical Spanish Mannerist elements. Leave the plaza on the right and head into the calle Marques de Larios, the city’s main shopping street since 1886. Its construction was financed largely by the Larios family, which made its fortune from gin. This street is particularly beautiful at night and around holidays, since it is lined with antiquated street lamps.

Take a left turn onto calles Strachan and Salinas and you will find yourself in front of the Cathedral (Mon-Sat 9am-7pm; admission charge; entrance on the side), with the elaborate facade of the Palacio Episcopal on your left. Construction on the gothic style Cathedral began in 1528 on the site of a former mosque.

Turn left onto Calle San Agustin. Midway along the cobble street you will see the palace of the Condese de Buenavista, built in 1530-40. The austere exterior and watchtower give the building an unusual martial appearance. Inside, it is graced by a beautiful patio. The building once housed a museum of fine arts which closed to make way for a museum devoted to Malaga’s most famous son, Pablo Picasso. The Museo Picasso has been made possible thanks to the donation of 182 of the artist’s works by his daughter-in-law, Christine.

At the end of Calle San Agustín, turn right into the pedestrian Calle Granada which takes you to the Plaza de La Merced. On the far corner of the square is the restored Casa Natal de Picasso (952-060-215, daily 11am-2pm; also Mon-Sat 5-8pm), where Picasso was born in 1881. It now houses the Picasso Foundation, containing reference library and rooms for temporary exhibitions. Cross the square again past Astoria Cinema, and turn right into the pedestrians-only Calle Alcazabilla. Cross over and look at the restored Roman theatre, built during the reign of Augustus and discovered in the 1950’s.

Then go into the Alcazaba (Wed-Mon 9:30am-8 pm). In the 8th century the Moors began building a fortress on the remains of the forts left by the Romans. It is connected by a rampart to the Castillo de Gibralfaro, a Moorish construction on Phoenician foundations at the top of the hill. What you see in la Alcazaba today is mostly a project ordered by the king of the Taifa of Granada in 1057, which was renovated in 1933. This is an introduction to typical features of Moorish architecture: double walls with defensive towers surrounding gardens, patios and palaces.

Go left when leaving the Alcazaba. The solid square building on your right is the old Aduana (customs) constructed for the port authorities in 1829, but which now houses the central government’s delegation in Malaga province. When you reach the tree-lined Paseo del Parque, continue to the left past the neo-baroque Ayuntamiento (Town Hall), completed in 1919. The building’s decorative features allude to the city’s economic activities of the time. Tourism wasn’t big business then and still isn’t much now. You get to Plaza del General Torrijos and the Fuente Genovesa, a Renaissance fountain. One block east from the plaza is Malaga’s Plaza de Toros, built in 1874. The area between the bullring and the seafront, called La Malagueta, has many good restaurants and bars. Try one of the seafood restaurants in the area and order fritura malagueña (a varied platter of fried fish). Alternatively, the Café de París (952-225-043, Calle Velez Málaga, 8), not far from the lighthouse, is one of the city’s best restaurants.

If you like, return to the city centre, going west towards the harbour, then along the Paseo de la Farola, turning onto the Paseo del Parque to walk through its gardens, which have 2,000 species of flowers and trees. You could lunch at one of the restaurants off Calle Marqués de Larios, such as the Restaurante Chinitas (952-210-972, Calle Moreno Monroy 4), or try a selection of tapas from the 75-plus choices at Bar Logueno or across the road at Calle Martín García. For an extra-special lunch, head back to your car and drive back trough Málaga and up the Gibralfaro mountain to the Parador (952-221-902), which stands just below the summit. If you get lost, this is a well-known stop and anyone should be able to direct you. Aside from good food, this hotel has the best view of Málaga and of its entire bay. You might enjoy a stroll through the restored Gibralfaro castle as well.

A guided visit around La Concepción Botanical Garden (Tues-Sun 10 am-dusk), on the northern outskirts of Málaga, is a pleasant way to spend the afternoon. At one time the private garden of a wealthy family, it has a large collection of exotic plants and palm trees. To go there, follow signs to Antequera until you get to the turn-off for the Jardín Histórico Botánico La Concepción. Otherwise, head back towards Marbella, following signs to Algeciras. The dual carriageway bypasses Torremolinos and the village of Benalmádena. Ignore signs for the toll motorway, head along the coastal N-340, bypassing Fuengirola.

If you have time, visit Puerto Cabopino. This is the newest of Marbella’s pueblo marinas and one of the prettiest on the coast. Enjoy a very good dinner in one of Marbella’s oldest and most famous restaurants: La Hacienda (952-831-367), which is located in an attractive villa in the Urbanización Hacienda Las Chapas.