Most towns have a carnival, usually during a week in February before Shrove Tuesday, with fancy-dress competitions and parades. The highlight of the celebrations is “El Entierro de la Sardina” marking the end of revelries and the beginning of Lent. 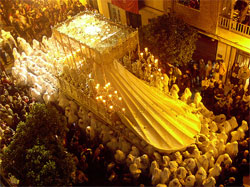 Holy Week or Semana Santa (Easter Week) processions mark the main religious celebrations in Spain, and most localities on the Costa del Sol have at least one procession. The biggest and best are in Malaga, whose Holy Week celebrations are famous across Spain. Processions start on Palm Sunday and continue until Easter Sunday with the most dramatic and solemn on Maundy Thursday and Good Friday. Huge ornate floats depicting images from the Passion are carried through the streets by penitents dressed in long purple robes, often with pointed hats, followed by women in black carrying candles. Drums and trumpets play solemn music and occasionally someone spontaneously sings a mournful saeta dedicated to the float as it makes its way slowly round the streets. Malaga’s most famous parades are Cristo de la Legión and Cristo del Perdón, whose float is followed by a recently released prisoner, granted pardon by the float’s brotherhood.

Many localities celebrate the summer solstice which falls on St. John’s day on 21st June with parties and purifying bonfires on the beach.

The Virgen del Carmen is the patron of fishermen, and in July most coastal localities celebrate a safe year’s fishing by parading the patron’s image in a procession of boats along the coast.