Set off at around 10 am and follow the road to Ojén. Between Ojén and Monda the road passes through a stark landscape and a small gorge. Some 19 km (11 ¾ miles) from Marbella is Monda. 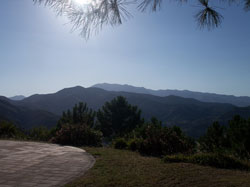 The village is overlooked by a castle-like structure on a hill. This is a luxury hotel, with 23-rooms, called Castillo de Monda. It was built by two Englishmen, and the St. George Cross occasionally flies over the ramparts. The building incorporates the remains of the original Moorish fortress, including an 8th-century tower.

10 km (6 ¼ miles) on you will find Coín (pop: 18,000), described by one Moorish writer as ‘a beautiful place with lots of springs, trees and fruit.’ The terracing and irrigation of the fertile surrounding area are legacies of the Moors. The locals socialise on the tree-lined avenue. Park nearby if you want a quick wander. The maze of narrow streets follows the old Moorish layout, new and old buildings are juxtaposed, and the churches Santa María (which was once a mosque) and San Juan Bautista are of Mudejar-Renaissance style.

Leave Coín on the A-355 to Cártama (take the Málaga road), passing through varied countryside. Across the Río de Guadalhorce, turn left on the MA-402 and head up the fertile valley where citrus and avocados grow. Near workaday Pizarra, in a converted farmhouse adjacent to an excellent restaurant, is the Museo de Pizarra (summer: Tues-Sun 10 am-3pm, 4-8pm; winter: Tues-Sun 10am-2pm, 4-6:30pm). Also known as the Museo Hollander, it has archaeological remains, Spanish antiques and various curiosities accumulated by the American painter Gino Hollander, who lived in these parts some 60 years ago.

As you leave Pizarra, the outline of Alora’s castle appears above the white houses that drop down the hill on either side. Phoenicians, Romans, Vandals, Moors and Christians all played a role in the castle’s history. Although Alora’s many new buildings are evidence of the town’s increased, agriculture-based prosperity, it retains much of its old character. It took the entire 17th century to finish the construction of its enormous church, which is the second-largest in Malaga province.

From Álora head west towards Ardales, taking a scenic drive through the rugged Sierra de Alcaparain and Sierra de Aguas. Turn right for Carratraca, which was developed in the 19th century on the site of the cortijo (country estate) of foul-smelling waters to become a spa for the rich and famous. Some 600 litres (132 gallons) per minute of sulphurous waters, recommend to ease respirator and skin complaints, gush from the ground at around 4 in the afternoon. Byron and Alexander Dumas, who made the arduous journey over the mountains to test the cures, stayed at the Hotel el Principe.

Continue through a landscape of almond and olive trees, and soon Ardales presents its striking aspect against the hills on the left. Above the white houses proudly stand the ochre outlines of its castle and the mudejar tower of its church. Though the Romans built the first bridge across the river below, Ardales’s roots go back much further – prehistoric paintings were discovered in local caves in 1821.

To protect the cave’s fragile environment, visits are limited. Call the Ardales museum (952-458-046) for information. Bear right at the junction after the town and very soon you are in Málaga’s Lake District. Three reservoirs fed by the Guadalhorce and other rivers supply much of the province’s water.

Continue through pine trees into the Parque de Ardales, a recreation park. Restaurant El Mirador (952-112-400), above a small tunnel, is an unpretentious place for lunch and has a good view of the reservoir.