The possibilities for nightlife on the Costa del Sol are endless and range from theme pubs to some of the most sophisticated nightclubs in Europe. Most towns have a good selection of nightclubs open until the wee hours, but the most famous are Olivia Valere and Oh! Marbella in Marbella, and Pachá in Plaza Mayor. Opening hours are usually from 10 or 11pm to 3 or 5am. Many clubs have a dress code and you may be required to show identification on entry. Some clubs open in the summer months only; entry fees vary. 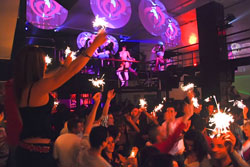 You can hear live music of almost any sort on the coast at different venues. Classical music concerts are given regularly by the Malaga Philharmonic Orchestra at the Cervantes Theatre in Malaga during the season from October to June. Other national and foreign orchestras also include the Costa del Sol in their tours.

There are numerous bars and clubs that offer live music as part of their nightly entertainment, where you can hear live jazz, local bands and singers, and flamenco. Expatriate crooners singing cover versions are popular entertainment at foreign bars and pubs. Needless to stay, some are better than others.

Spanish singers and bands play regularly on the coast, and top international sololists and bands occasionally give concerts, particularly during the summer months.

You can watch flamenco dancing at numerous venues along the coast. Many bars and restaurants offer a flamenco show as part of the evening’s entertainment, although the quality of dancing and music varies tremendously, especially when you find a locale that only plays recorded music.

The best and most authentic offering live singing and music is found at specialist venues known as tablaos, like Bona Bea in Marbella, Taberna Flamenca Pepe Lopez in Benalmadena and Vista Andalucia in Malaga.

Concerts and recitals are also put on regularly at larger venues around the coast, including Teatro Cervantes in Malaga and perhaps surprisingly, Tívoli in the summer months.

Enthusiasts may be interested in joining one of the many active flamenco clubs on the coast. Flamenco dancing is also very popular with young children, and there are several academies in most towns.

Plaza Mayor, the name often designated to the largest square in Spanish towns, is a leisure complex built in typical Andalusian style with plentiful walkways, squares and fountains, and consisting of some 60 restaurants and cafés, numerous bars and nightclubs, a 20-lane bowling alley and 20-screen cinema. The complex, which has proved hugely popular with both residents and tourists, is open daily from 10am to 3am. It is situated near the Malaga Airport off the A-7 “Parador de Golf” exit, and there’s ample parking as well as bus and train services.