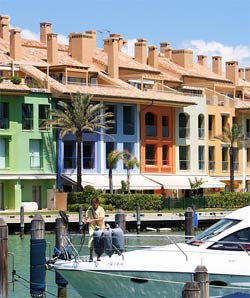 Take the road to Casares and turn right on the A-377, signposted Gaucín. Be sure to drive carefully along the narrow 16 km (10 mile) road which, although easily navigable, can be treacherous. Falcons fly above the beautiful land as the road meanders down the Río Genal and then up the other side to Gaucín, which sits high above the valley.

Park wherever you can find a space in the village. One of the main sights is the 13th-century Moorish Castillo de Aguile (Open daily 11am-1pm, 4-6pm). In 1848 the powder magazine blew up and destroyed much of the monument. Defender of Tarifa, Gúzman el Bueno, died here fighting the Moors in 1309. The Fonda National (952-151-092, Calle Juan de Dios 8) has been serving customers since the 1860’s and it retains its ‘old-world’ feel, although now it functions only as a restaurant. Once named the Hotel Inglés, it was frequented by the members of Gibraltar’s garrison who needed an overnight stopover on the way to and from Ronda.

Leave Gaucín on the A-369 signposted to Algeciras and 2 km (1 ¼ mi) on look back to catch a wonderful view of the village. The road drops through gorse and grass-covered hills past picturesque cortijos (farm states), near which horses and cattle shelter. After 13 km (8 mi) the road enters Cadiz province and crosses the Río Guadiaro. This is bull-raising country: about 3 km (1 ¾ mi) after the hamlet of San Pablo you see a bull ranch on the left.

The white profile of Jimena de la Frontera is outlined against a hill topped by a ruined castle. Quite a few foreigners in search of the ‘real Spain’ have settled around the village, in the process affecting the ‘authenticity’ of what they were seeking originally.

Continue south on the A-369 past meadows where cattle graze and through avenues of eucalyptus trees until, 14 km ( 8 ¾ mi) from Jimena, there’s a tiny road to the right leading to Castellar de la Frontera. The villagers abandoned this isolated place when Nuevo Castellar was built on the main road. The remains of a frontier castle that once proved to be pivotal in the struggle between Christians and Arabs broods over the newcomers’ hideaway and the waters of the Embalse de Guadarranque reservoir. A narrow but very scenic road weaves southward to the A-369.

Turn left and head into Nuevo Castellar, from where you can pick up a back street to Puerto de Sotogrande. The marina’s ‘modern Mediterranean’ style is quite different from the other ports on the Costa. Here you may want to have a drink and watch the sun go down over Gibraltar. It’s an easy run of 50 km (31 mile) back to Marbella.