See the historic architecture in the town and villages of Antequera and visit its small gem of a museum. Enter the lunar landscape of El Torcal before driving through the Montes de Málaga. 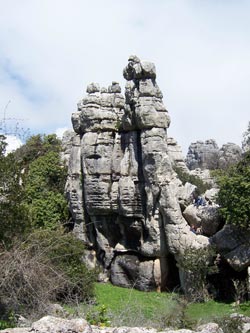 You can drive to Antequera in about 1 ½ hours. Take the N-340 towards Málaga, after passing through a number of tunnels, the road reaches the highest, 780 m (2,560 ft) point of Puerto de las Pedrizas and the N-331 branches off to Antequera (signposted to Sevilla and Córdoba). The road descends, offering the first views of Antequera’s rich agricultural plain.

In land area, Antequera is the country’s fifth-largest municipality, home to about 40,000 residents. Agriculture, especially grains and olives, is the economic mainstay. Many consider the oil made from the local Hojiblanca variety of olive to be the best in Spain. A new and highly productive crop here is sunflowers, which make a vivid patchwork through the Vega (fertile plain) in early summer. Some 12 km (7 miles) further on, turn left into Antequera.

Drive into town and follow the signs to the Castillo or Alcazaba. Walk through the Arco de los Gigantes, a Mannerist building from 1585. Looking back, it gives a picture-frame view of the town and its towers. Ahead is the facade of the Real Colegiata de Santa María, a huge church built in 1514-50, where, according to the plaque on its wall, a group of leading Spanish humanists taught, in defiance of theological opposition that argued that the humanistic emphasis on reason, knowledge and the centrality of man in the scheme of things was incompatible with Christian dogma. The restored church is now a national monument. From the side of the arch, steps lead up into what remains of the Alcazaba, which the Moors built in the 14th century on the remains of a Roman fortress. Now it is mostly a garden overlooked by the bell tower of Torre del Papabellotas (Father Acorn’s Tower), built in 1582 with funds from the sale of a cork-oak plot. It was not long after taking the town from the Moors in 1410 that the Christians embarked on a building spree of churches and monasteries. Look eastward and you will see La Peña de los Enamorados (Lovers’ Peak), which resembles a reclining figure. The peak is associated with a sad love story. Tazgona, daughter of a wealthy Moor from Archidona, was the secret lover of a Christian from the Giants’ Arch. Take a left down Calle Herradores to the mid-18th-century Plaza el Portichuelo, which is an ornate baroque affair. The street chapel of Santa María La Vieja, one of the numerous churches repaired after the ravages of Napoleon’s army, is like many seen in Mexico. In the niche of the high altar, the image of the Virgen de Socorro is especially revered by the townsfolk.

Along Cuesto Álvaro de Oviedo and right into Pastillas, you will see on your right the Casa Marqués de las Escalonias, a Mannerist-style palace from the late 17th century that exemplifies the type of town house in which local aristocrats lived. It’s worth making an effort to see its Arab-style gardens, which are overlooked by three-floored galleries.

Turn left into Cuesta del Viento, descend a flight of steps and you will pass by the 17th century Iglesia de Santo Domingo, dominating the plaza of the same name with a striking baroque-mudéjar tower and an interior filled with paintings and sculpture. The plaza’s fountain dates from about the same period.

Go left down Calle Nájera, bearing left to the small, pretty Plaza de las Descalzas (Square of the Barefooted), behind which is the Convento de las Descalzas of the closest order of Carmelites. The convent’s facade, a good example of the particular baroque style found in Antequera, somewhat ironically includes references to pagan mythology in its decoration. Turn up Cuesta de los Rojas, alongside the convent, and left beside the gateway of Postigo de la Estrella to the National Monument of Convento del Carmen. This forms the remains of a 1633 Carmelite convent. The rich interior is dominated by three large reredos, or altarpieces.

Go back to Plaza de las Descalzas, through Calle Calzada, and then right, past the market at Plaza de San Francisco to the 1515 late-Gothic monument of Iglesia de San Zolio. If you can, enter to see mudéjar plasterwork and the dome. Take Calle Diego Ponce past the 18th century Iglesia de Madre de Dios, a good example of Andalusian rococo architecture. When you reach the Alameda of Andalucía, turn left into Calle Infante Don Fernando. On the left is the 17th century Iglesia de los Remedios, dedicated to Antequera patron saints, Nuestra Señora de lo Remedios. The church’s convent houses the Palacio Consistorial (town hall) with its 1950’s neo-baroque facade and late 17th-century colonnaded cloister. Continue along the town’s principal shopping street, noting the belfry of Iglesia de San Agustin. Cross Plaza San Sebastian into Cuesta Zapatero and Cuesta San Judas, and up a hill past white-washed houses to return to your car. For lunch we recommend you to go to El Angelote (952-703-465) in Plaza Coso Viejo, near the museum. Or head back to your car and follow signs to the Parador whose restaurant (952-840-261) is also a good option.

After lunch, take the scenic 16 km (10 mile) drive to El Torcal de Antequera. In this 1,200 ha (2,965 acres) of protected land you can wander among strange and wonderful limestone formations carved by the elements. There are paths marked and you are well-advised to follow them. Wild irises, labiates and home oaks are among the varied vegetation. At the end of the road from El Torcal, turn to Villanueva de la Concepción and head east along a pot-holed road to Casa Bermeja.

In Casa Bermeja follow the signposts to Malaga. This route passes through the area of Parque Natural de Montes de Málaga. When you rejoin the Málaga-Antequera road, follow the signs to Torremolinos or, if time allows, you may want to follow signs to the Jardín Histórico Botánico where you can roam the gardens of La Concepción.