A healthy choice of plays and concerts is offered at venues around the coast, and most towns have an extensive cultural programme, mostly in Spanish, although some events are in English. Theatre can be seen in English – mainly at Salón Varietés in Fuengirola – and numerous foreign language theatre groups and clubs on the coast also perform regularly at different locations. See the local press for details. 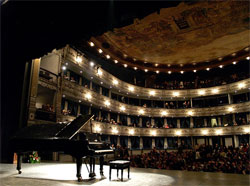 The open-air venue in the main park offers a programme of theatre, dance and music during the summer months. Programme listings can be found in local newspapers.

Salón Varietés Theatre
Situated in central Fuengirola, this is one of the coast’s oldest and offers an extensive year-round programme of theatre, dance and musicals in English. Events are popular so book early for good seats.
(952-474-542)

Palacio de la Paz
Offers an extensive range of theatre and recitals throughout the year including the annual Festival of Musicals held in July/August.

Teatro Cervantes
Malaga’s main theatre situated in the centre of the old quarter offers a year-round programme of music, opera, dance and theatre, mostly in Spanish, although occasionally foreign companies perform. The theatre is also the main stage for the Malaga Philharmonic Orchestra. The annual jazz festival is held here in the autumn.
(952-224-109)