The Costa del Sol has a good selection of beaches ranking from long stretches of sand to tiny pebbled coves depending on the area. None of the beaches in Malaga are particularly wide, and the tide never really goes out more than a couple of metres except on windy or stormy days.

Municipalities use to clean daily most beaches from March to September; some localities clean their beaches all year round. Lifeguard services are available on many beaches during July, August and part of September, and some localities have teams of beach patrollers walking the beaches as well. Outdoor showers are available on many beaches and often have toilets, showers and changing facilities. 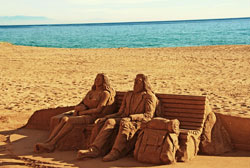 Beaches get very busy in the summer months, particularly on Sundays when local families flock to the beach together with friends, huge tents, enough food for an army and tons of sea gear. It’s not uncommon to see tables laid with a tablecloth, cutlery, plates and glasses with a television or radio nearby. These families arrive at around noon and pack up late in the evening. On the other hand, many beaches are almost deserted in the autumn and winter months; during those seasons you can walk for miles and sunbathe in peace.

Parking near the beach

There are no private beaches on the Costa del Sol, and access is good and well-signposted from the A-7 (signs usually say “Acceso Público a la Playa”). Parking facilities are limited in some places, and during the summer attendants operate in many car parks. You’re not obliged to pay them, although many people do.

Beaches to the west of the Costa del Sol are generally sandy or having only small pebbles. The best sandy beaches in the area are on the east side of Marbella stretching from Los Monteros to the Don Carlos hotel.

Estepona and Marbella have good beaches with excellent facilities, most also have access for the disabled.We can also can have a great time at quiet beaches such as Cabo Pino which has excellent facilities with one of the largest campsites in Malaga. In addition to its more than three thousand metres length, Cabo Pino Beach is situated only a few kilometres from Artola Dunes Natural Monument, a unique and incomparable place from which you can admire breathtaking sunsets.

Mijas Costa has few good beaches apart from the sandy bay at La Cala. The other beaches are narrow, often rocky with sea urchins, and are rarely cleaned out of season. Fuengirola, Benalmadena and Torremolinos all have nice, clean municipal beaches with excellent facilities.

Malaga’s beaches are on the east side of the city where the Playa de la Malagueta, Los Baños del Carmen and the Playa del Palo are. The sand is grey and occasionally there are problems with pollution from the nearby port but in general the beaches are well-maintained and clean.

There are several long, grey sandy beaches on the east side and Nerja has many isolated coves. Some of these, particularly near Maro, are protected natural areas and vehicle access is prohibited. The sand is coarse, and beaches in some parts aren’t well-maintained out of season.

Playa de Calahonda, in the town of Nerja, or the beach next to the cliffs of Cerro Gordo are some of the quietest and best preserved of the entire province. One of the favorite beaches of many nudists in the area is the Playa de Las Alberquinas. There you can also enjoy the whimsical shapes of rocks and cliffs that characterize its natural environment.

Nudism is generally not officially permitted on beaches on the Costa del Sol. Bear in mind that if you go nude on a public beach, you risk problems with the police if other people on the beach complain. Going topless on beaches is allowed and is quite common, although some beach clubs don’t allow it.

Remember that all these beaches and coves are not within walking distance between them. If you want to visit the best beaches we recommend to recommend to check prices for Malaga car hire. Traveling in your own car is the most economical and fun way to visit them.