Malaga province has several natural parks which offer the chance to enjoy spectacular scenery, often in peace and quiet. Many parks are busy on weekends and holidays but if you’re prepared to walk a bit it’s easy to get away from the crowds. In some areas of the parks the number of visitors is limited daily, so you may have to book beforehand. Most parks organise guided or semi-guided tours and hikes throughout the year. Information is available from the park itself or from the regional authorities on the Andalusian tourism website.

Situated to the northwest of Malaga in beautiful natural surroundings, including the Guadalhorce River gorge and extensive pine forests. Activities include water sports on the reservoir, hiking, rock climbing and caving. The area has a campsite and rural accommodation.
952-458-046

Situated to the north of Marbella and east of Ronda, these spectacular peaks include the highest in the province, Torrecilla, and offer numerous possibilities for walking and climbing. The area is home to unique fauna including several species of birds of prey and the Spanish mountain goat. Limited accommodation is available in the villages on the park’s boundaries such as Istán, Yunquera and Tolox.
952-877-778

Situated to the north of Malaga city, these attractive pine-covered mountains offer numerous possibilities for walking and trekking. The park authorities also offer guided walks and visits to the area.
952-041-169 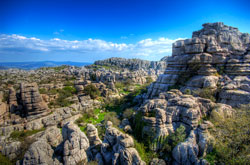 Situated to the south of Antequera are the Torcal rock formations where wind and rain have carved spectacular shapes into the karst rock, forming deep gorges and towering peaks. There are several itineraries to choose from, and the area have views of the surrounding countryside. Accommodation is available in nearby Villanueva de la Concepción and Antequera.
952-031-389

Situated in the far west of the province, this park is one of the most stunning in Spain with abundant vegetation and picturesque pueblos blancos (white villages). The park is also home to a wide range of fauna and the Pinsapo pine tree, found only in this part of Spain and Morocco. Accommodation is available in the park or in surrounding villages such as Grazalema and Zahara de la Sierra.
952-716-063

In addition to the parks mentioned above, the Costa del Sol is also within relatively short driving distance of numerous other natural parks, such as Cazorla in Jaén, Doñana in Huelva, Sierra Nevada in Granada, Cabo de Gata in Almería and Sierras de Andújar in Jaén.