Take the coastal N-340, not the toll motorway. Before you reach the town you will see areas that are becoming the next trendy area of the Costa de Sol, with beachside property developments, golf courses and luxury hotels such as Las Dunas and the Kempinski. 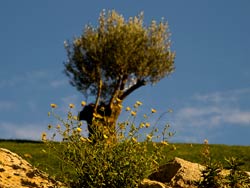 For horse lovers, 5 km (3 miles) before the town (turn off at km 159) is the Escuela de Arte Ecuestre (952-808-077), a riding centre that features a dressage demonstration one evening per week – on Fridays in summer and Tuesdays in winter. Both adults and children will be attracted to the Selwo Aventura Park (952-792-150), a 100 ha (250 acre) reserve where lions, tigers, elephants, rhinoceros and other exotic species roam. Visitors view the resident wildlife from special buses, but to tour the park in full takes the better part of a day, so you might want to save that for a separate outing. For now, continue on to Estepona, and park along the Avenida de España, which runs alongside the beach. The tourist office (Mon-Fri 9am-3pm, Sat 10am-1pm) at the eastern end of the adjoining Paseo Marítimo is the place to ask about any special events, exhibitions and the like. Cross over into Calle Santa Ana and wander at will around the old town.

Street names are painted on ceramic tiles. During the summer, cafés put out tables in the attractive Plaza de Las Flores, once a venue for bullfights. At its eastern end in the Casa de la Cultura there may be an exhibition of interest. In Calle Castillo are remnants of the wall of a castle first built by the Moors and rebuilt after the Christians took the town in 1456. Behind the ruins is the bustling weekday food market. The town’s clock tower symbol, Torre del Reloj, remains from a 15th-century church. Wander through the back streets, keeping an eye out for art and craft shops.

What distinguishes the municipality from others along the coast is the ongoing role agriculture plays in the lives of many of its 25,000 residents. Here the development and diversification of agriculture is actively supported by the local authorities. You can see evidence of this on your drive into the Sierra Bermeja. In a place of traditional lemon-growing, more profitable tropical fruits are harvested. A monument on the promenade honours the honest toil of Estepona’s farmers and fishermen. The town still has an active fishing fleet.

Back in your car, take Calle La Terraza, which heads out of the old town and is signposted ‘Jubrique’. The road is in a good state of repair and rises through agricultural land to the starker slopes of the Sierra Bermeja and Peñas Blancas. About 15 km (9 mi) from the town, turn off at Los Reales. Marked paths lead deeper into the woods to Pinsapo firs – the classical model of a Christmas tree that is indigenous to the area and grows only at heights of more than 1000 m (3,280 ft). The high point, Alto Los Reales (1,450 m / 4,757 ft), looks out over the coast some 8 km (5 mi) away to Gibraltar and, on a clear day, even to Africa.

Return the same way you came. You can stop for lunch about 2 km (1 ¼ mi) before Estepona in the Venta Los Reales. Travel through the town and west to Puerto Estepona where the fishing fleet is anchored next to a small pleasure craft and ocean-going vessels. The port does not have the glamour of Puerto Banus but isn’t less attractive because of that. On Sunday morning it is the scene of one of Costa del Sol’s markets with stalls selling arts and crafts, second hand bric-a-brac, clothes and houseware.