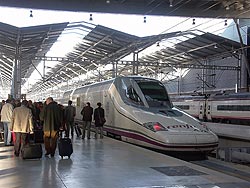 The only access by train to the Costa del Sol is to Malaga’s mainline station served by trains from Madrid, Granada, Cordoba and Sevilla. This station is interchangeably called Maria Zambrano (the official name), Malaga-Renfe, and Viala, actually the name of the shopping centre built around the station.

The trains are comfortable with air conditioned. You can purchase tickets from machines at most stations or from ticket offices; If there isn’t a machine at a station you may be able to buy your ticket on the train from the inspector.

The tickets price depends on the number of zones you travel through. Both train lines have five travel zones and prices range from 1.70€ to 3.50€ one-way, and 3.40€ to 7.00€ round-trip. Monthly tickets are also available, with prices around 35.10-74.25€ depending on selected zones.

Malaga train to Fuengirola service runs two trains per hour with stops at:

The journey from Malaga to Fuengirola takes just 45 minutes and the service is generally very efficient with a high degree of punctuality. The first train leaves Malaga centre at 5:20am, and subsequent departures are 20 past the hour and 20 to the hour. The last train is at 11:30pm.

Malaga train to Alora runs from Malaga centre and stops at: