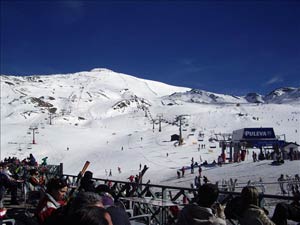 The Costa del Sol claims to be one of the few places in the world where you can ski in the morning and sunbathe on the beach in the afternoon. The area’s nearest ski resort is situated in Sierra Nevada some 200km north in the province of Granada. The journey from the coast to the slopes takes around two hours by car.

The resort centred on the village of Pradollano offers 70km of pistes with 30 runs. The village has ample accommodation in hotels and apartments and there are also numerous restaurants and shops, including ski equipment hire.

There’s undercover parking for 2.800 vehicles and outside parking for 1.000.during the skiing season snow is guaranteed as the resort has an extensive network of snow-making machines. Sierra Nevada is Europe’s southern resort and the sun is very strong on the slopes even when the temperatures are low.