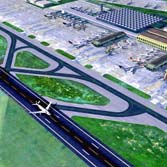 After four years of work is now finished the second runway at Malaga airport and after a test period will be opened probably in the first quarter of 2012. The new runway will double the number of operations to 72 flights and over 9,000 passengers per hour.

Malaga airport has become the fifth Spanish airport with two runways, in addition to Madrid, Barcelona, Gran Canaria and Palma de Mallorca, which further emphasizes the capacity of landing and takeoff of planes with very large dimensions such as Jumbo and Airbus last generation.